Harrisburg, Pa. – Harrisburg University of Science and Technology hosted a beam-signing “topping off” ceremony in the Strawberry Square Atrium (320 Market St.) to commemorate the latest milestone in the construction of the University’s more than $100 million Education Center from 5:30-7:30 p.m. on Thursday, November 4, 2021.

Donors, dignitaries, faculty, students, and staff gathered to sign the final two beams of the 11-story structure that will comprise 210,000 square feet at South Third and Chestnut streets in downtown Harrisburg. The building will house HU’s Health Sciences, Advanced Manufacturing, and Interactive Media Programs when it opens in 2023.

“The University has accomplished a great deal on all fronts since we broke ground for this building, and we also experienced the trauma of a global pandemic. With this building, we make room for 1,000 more students, for change that is exponential,” Harrisburg University President Dr. Eric Darr said at the event. “This is a $100 million building in the heart of downtown Harrisburg, once again giving this city a jolt of sustained energy.”

“It’s what we have done all along,” Darr added. “It’s there in our original Academic Center, student housing that revitalizes historic structures, the groundbreaking HU Presents Concert Series, our championship Esports Team, the HU Storm, and, of course, world-class research and experiential learning.”

A beam signing and “topping off” ceremony is a long-standing tradition of construction workers, particularly steelworkers, to commemorate the completion of a building‘s structure.

During the event, attendees signed the final two beams before they are lifted and installed atop the structure Friday.

“It’s worth repeating the size and location to underscore its impact – a $100 million building in downtown Harrisburg. But we are not just celebrating a building,” said David Schankweiler, HU founding Board of Trustees Chairman, Trustee Emeritus. “We celebrate the people of a very dedicated community of individuals from academia, the business community, government, and volunteer citizens. We celebrate the spirit, tenacity, and desire of that group to envision and realize a dream of providing our capital city with a residential educational institution that is unique and prospering for the benefit of students and our economy.”

“In the span of HU’s history, this building and its programs once again represents momentum. That’s only fair because HU has never been the stone that gathers moss. We are rolling,” Schankweiler added. “Tonight, we celebrate this moment with the ceremonial signing of the last beam of the building. A beam and a building that is set to change the city’s skyline, and a University that continues to change lives, change a city, and is having a unique and dramatic effect on the economy of Central Pennsylvania.” 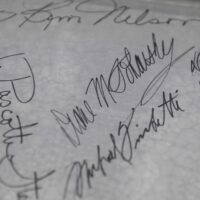 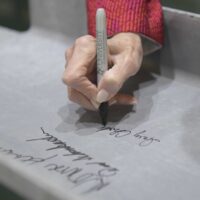 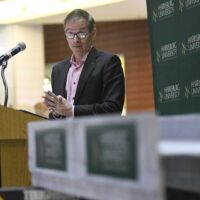 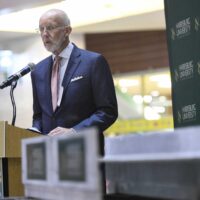 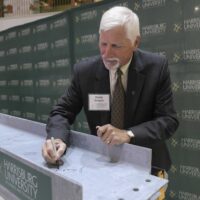 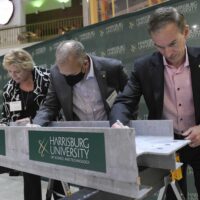 EDUCATION CENTER BY THE NUMBERS: