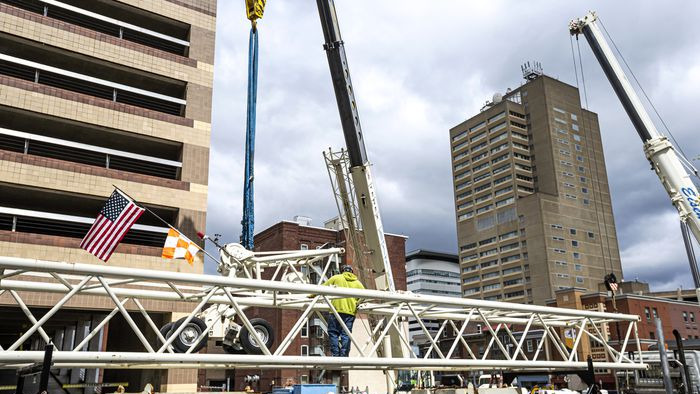 The 255-foot-high crane that will be used to construct Harrisburg University’s 11-story Health Science Education Center in downtown Harrisburg was erected above the building’s footprint at South Third and Chestnut streets during the weekend.

Chestnut Street, between Second and Third streets, will remain closed until Tuesday morning as the crane assembly is completed.

The new building will contain 260,000 square feet of academic space and will accommodate at least 1,000 new students in nursing, pharmaceutical sciences and other allied health programs.

The center also will include classrooms and training space for advanced manufacturing and interactive media programs, in addition to auditoriums, and student life and tutoring areas.

The timeline for the project has been affected by the COVID-19 pandemic. The building, slated to open in January of 2022 prior to the pandemic, is expected to open in 2023.

The University is spending $100 million on this project. No tax-exempt bonds will pay for the construction of the building.

Harrisburg-based Reynolds Enterprises Inc. and The Whiting-Turner Contracting Co., based in Baltimore, were hired to support Butler County architect Alex Wing of Stantec on pre-construction plans for the building.

The university broke ground on the project in July of 2019.

For media coverage of the crane assembly, follow the links below:

PennLive: Giant crane will tower over the city as Harrisburg University’s 11-story, $100M addition goes up

UPDATE – PROFESSIONAL DEVELOPMENT | IT BOARD OF ADVISORS AT HARRISBURG UNIVERSITY

Harrisburg University of Science and Technology is once again pleased to announce that we have an exciting addition to our...

Examining equity in a digital currency world and financial literacy will be discussed at an upcoming no-charge conference on cryptocurrency,...

Rampant inflation has been increasing the prices of everything, especially colleges. But Harrisburg University of Science and Technology has not...

Harrisburg University celebrated “Subs Day” on August 11th  to recognize  its construction partner, Whiting-Turner, and about 200 subcontractors representing over...

Summer camps provide a great environment for kids to develop social and decision-making skills and they often introduce children to...

Could exercise be an important tool in improving the lives of those experiencing homelessness? According to a study recently conducted...

NBC Nightly News recently came to Harrisburg University of Science and Technology to film an extraordinary story about one of...

HU places on Top 10 of colleges with superior esports programs

A publication has placed Harrisburg University of Science and Technology at #8 on its Top 10 list of colleges with...

The HU Library, in partnership with faculty and administration, continues to work to reduce the student cost burden of textbooks. The...