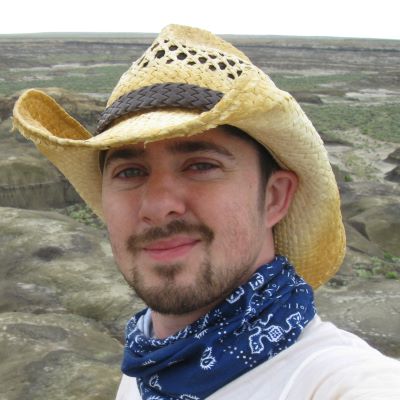 Dr. Steven Jasinski began his journey in rural southern Pennsylvania. His love of nature and the environment eventually led him to Penn State University, where he received his B.S. in Geobiology. While there he conducted research on morphologic variation and biomechanics in dinosaurs while conducting field work in various places throughout the state. Following this, he traveled south to East Tennessee State University, where he worked on younger Cenozoic fossils and modern animals. His research touched on things from turtles and snakes to mammalian carnivorans and dasypodid armadillos. He then went to the University of Pennsylvania for his Ph.D., largely focusing on dinosaurs (mainly theropods) and fossil turtles, while further exploring evolutionary relationships, paleoecology, and paleobiology.

While getting his graduate degrees, he also volunteered and worked in the Department of Paleontology and Geology at the State Museum of Pennsylvania. While there he conducted research on various Cretaceous animals, mainly dinosaurs, while also conducting field work in various places throughout the world. Most of this field work was centered on Late Cretaceous fossils in the American Southwest, specifically in New Mexico. His work on Late Cretaceous ecosystems has continued, including the naming and description of numerous new fossil species.

Recently his research program has continued describing and naming new species of fossil animals, including new species of dinosaurs, turtles, snakes, and dogs. He has further explored biodiversity through time, seeking to gather data on what the world was like in the past, and how that information can be used to preserve our biodiversity today and deal with the various crises it is facing. His active research program not only continues research on dinosaurs and fossil reptiles (particularly turtles), but has delved further into carnivoran mammals, and has begun investigating long term trends in shark and ray evolution and the paleobiology of fossil species. In addition to this research, he enjoys teaching science courses to college students, providing them a background and foundation to continue to explore science moving forward, or giving them an appreciation of science with whatever career choices they may make while at Harrisburg University and beyond.

A group of researchers, led by Harrisburg University of Science and Technology Professor Dr. Steven Jasinski, have recently published a...

A group of researchers, including Harrisburg University of Science and Technology Professor Dr. Steven Jasinski, recently named and described a...

A group of researchers, led by Harrisburg University of Science and Technology Professor Dr. Steven Jasinski, recently named and described...

A group of researchers, including Harrisburg University of Science and Technology Professor Dr. Steven Jasinski, recently named and described a...

A Harrisburg University of Science and Technology professor is part of a research team that has named and described a...

Environmental Science and Sustainability Faculty member Steven Jasinski and co-author Bryan Gee have published a FirstView article in the Journal...