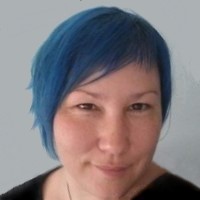 Hailing from Montreal, Canada, Dr. Boudreau began teaching in the United Kingdom in one of the first academic programs that focused on both Game Studies and Game Design which has shaped her perspective on the importance of theory supported game design. With a background in sociology, film studies, and games studies, Dr. Boudreau has published on a range of subjects around digital games, players, game culture, and games user research.

Dr. Boudreau’s current research spans several areas including exploring the changing nature of mediated forms of sociality in digital gameplay, the concept of player/avatar hybridity developed through the networked process of play, as well as addressing different issues around toxic and problematic behavior in video game play and culture.

Dr. Boudreau has been invited to teach and speak in several European countries before landing at HU which has strongly influenced her desire to share these experiences with her students and embed global perspectives in both her teaching and research.

HU Professor to present at digital gaming conference in Japan

Congratulations to Interactive Media Theory and Design Professor Dr. Kelly Boudreau, who served as one of two keynote speakers featured...